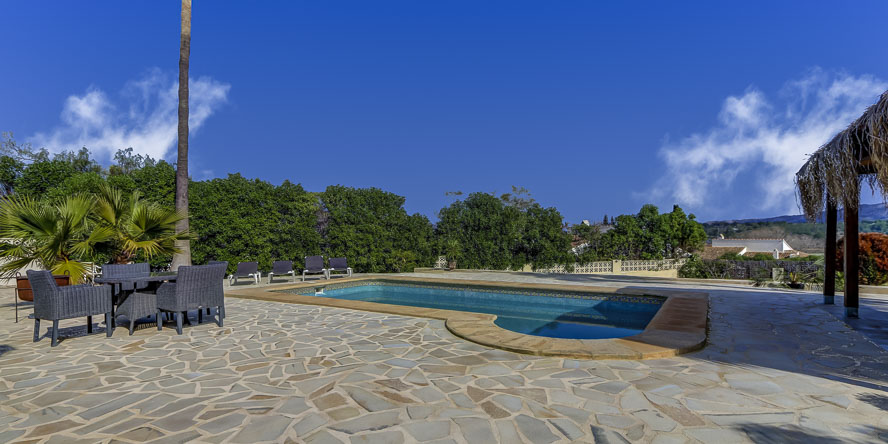 This beautiful well presented villa located in Javea , has lovely  views over the golf course and the Montgo mountain.
There is ample parking on the driveway. You will feel right at home in this well set out villa suitable for 9 people.

The villa has been tastefully decorated with everything you will need for indoor and outdoor living.

The property is built over 2 floors - on the entry level is the open plan living room with air conditioning,and kitchen with a breakfast bar. There is a double bedroom with a full ensuite. Also on this level is the cloakroom and the utility room. The kitchen is fully equipped with fridge freezer, 2 ovens and all the modern features one would expect. The living room leads out to the furnished covered naya ideal for outdoor dining and relaxing.


Downstairs  you will find 2 further bedrooms - a king size room with air conditioning and a triple room with a ceiling fan. There is a lovely wet room for these 2 rooms to share.

The fourth bedroom has a private entrance and is equipped with two single beds, a separate toilet and sink and there is a warm shower outside on the pool terrace. A fan and air conditioning is provided to cool the room.

The sandy arenal beach is located 10 minutes drive away (7km), the old town is 5km away, the golf club with restaurant is 600 meters away

A beautiful villa in an ideal setting. 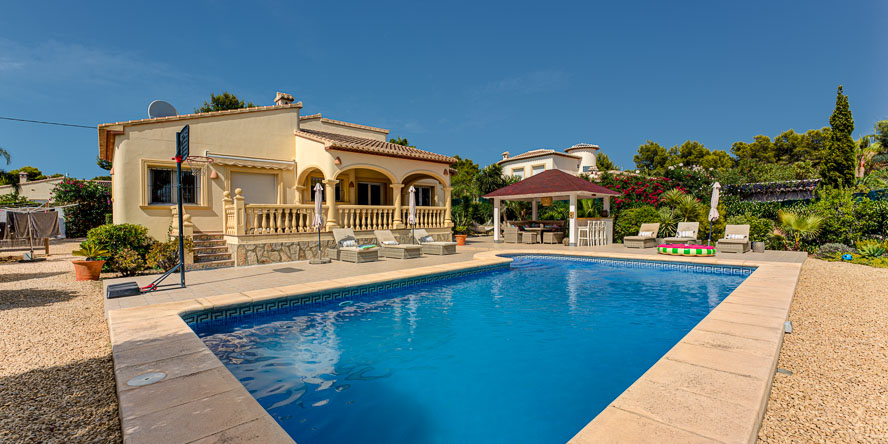 Registration number EGVT666A. This is a no pet property.


A luxury 3 bed,2 bath villa all on one level. The villa has been beautifully furnished throughout and has a large
private 10m x 5m swimming pool and, a lovely outdoor gazebo area set in large grounds.

The pool and garden light up at night and look stunning. The terraces and gazebo are furnished with sun lounges, relaxing sofas, chairs, dining table, BBQ and a drinks fridge. Shaded areas are provided making yout time by the pool comfortable and relaxing.

There is plenty of private parking space available.

The layout of the villa is all on one level comprising of a covered naya leading onto the lounge and dining area. Leading off from the dining area is the fully fitted kitchen. The 3 bedrooms and 2 bathrooms are located off from the lounge.

Also boasting, wifi, English TV channels, central heating and air conditioning. There is an Xbox 360 for your entertainment.

In the local area there are several bars and restaurants that can be reached on foot - about 10 minutes walk away. The blue flag Grandella beach is accessed by a courtesy shuttle bus throughout the months of July and August and the bus stop is a five minute walk from the villa. The sandy Arenal beach is approx 5km away - here you will find numerous excellent restaurants and bars. There are lot of water sports available at the beach.

The villa offers every amenity for a perfect holiday -  you will not be disappointed! 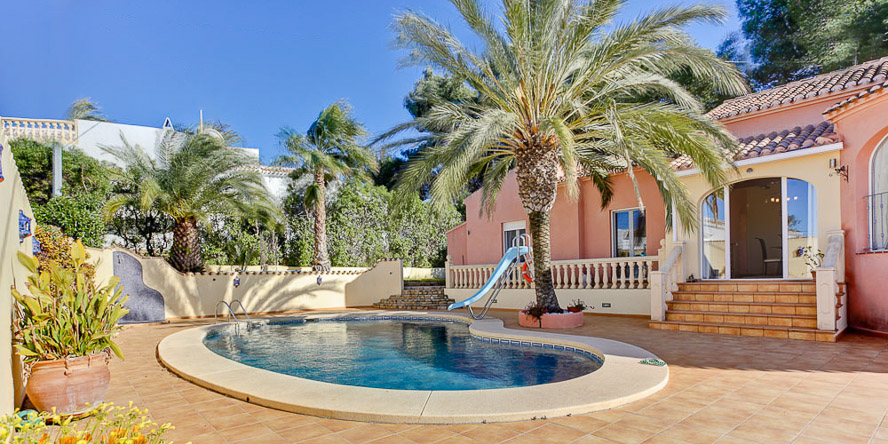 Villa Ivon is a spacious modern villa only 2km to the sandy beach in Javea, with air - conditioning, wifi, UK TV  and a  private pool


Villa Ivon is a 3 bed-roomed detached villa located in the Toscal area of Javea. The villa is set in private gardens and has a kidney shaped pool. This spacious villa comprises of an entrance hallway, lounge / dining room, a modern fully equipped kitchen, two double bedrooms, one twin bedroom  and 2 bathrooms. There is a sofa bed for guests 7 and 8 - extra charges apply or reserve the apartment for an additional charge


There is air conditioning and wifi throughout the villa and it also has central heating. All this is only 2km from Javea blue flag beach. Outdoors you will find secure parking, patios and gardens furnished for sunbathing, BBQ´s and al-fresco dining.

Furnished to a high standard you will not be disappointed! 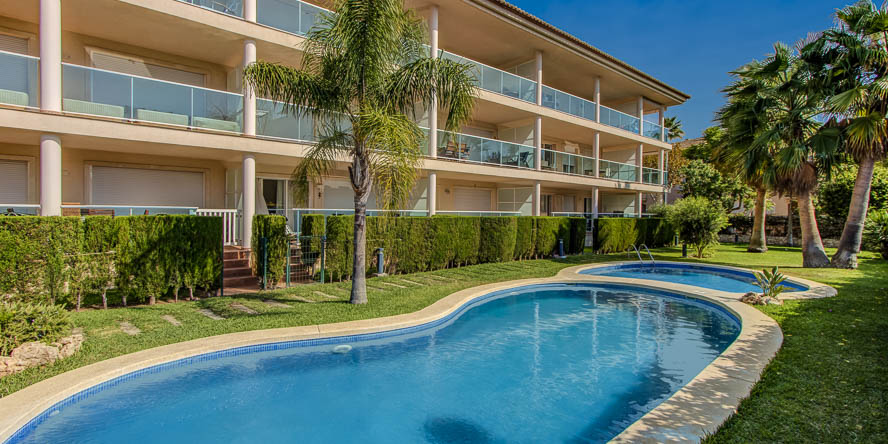 Beautiful modern 2 bedroomed  top floor apartment, on a small complex of only 15 other apartments, furnished to a high standard, south facing with views of the pool.

This beautiful Apartment is located on Calle Genova and comprises of entrance to light and spacious open plan living/dinning area with DVD player, flat screen TV with cable TV and free wifi. Double doors lead to a large balcony with beautiful alfresco furniture and views over the pool and garden.

There are two bedroom with fitted wardrobes, the master has an en-suite bathroom, and there is a second separate shower room. All rooms lead onto the spacious balcony.

The lovely communal swimming pool has a children's section and the gardens are secure and well maintained. The apartment is within a few minutes walk to the beached , restaurants and shops in Javea 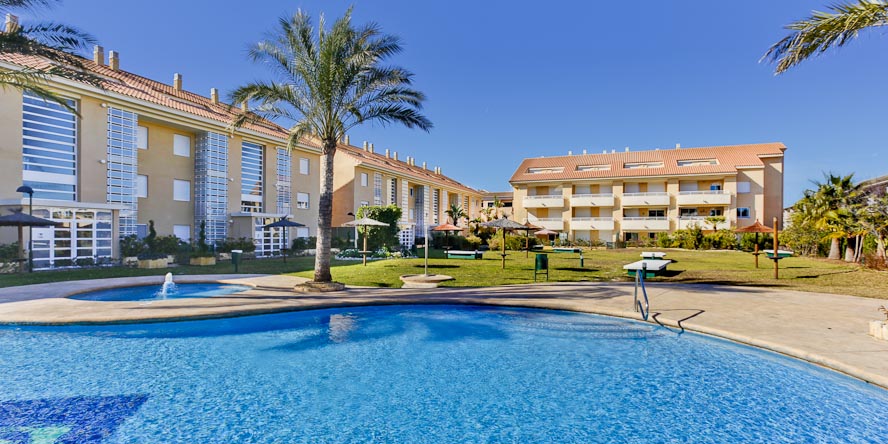 This modern apartment sleeps 5 people and has nice open views to the Montgo mountain.

This 1st floor Golden Beach 2 apartment has been well furnished and is 5 minutes walk away from the beach.

It comprises of an entrance hallway leading to a bright & airy lounge/dining room with patio doors leading to a furnished private terrace for ál fresco’ dining. The lounge has UK TV and air conditioning.

The large master bedroom has spacious built in wardrobes and patio doors leading to the terrace. From the terraces you can enjoy open views to the mountains and surrounding area.

The twin bedroom has built in wardrobes. There is a family bathroom and a shower room. 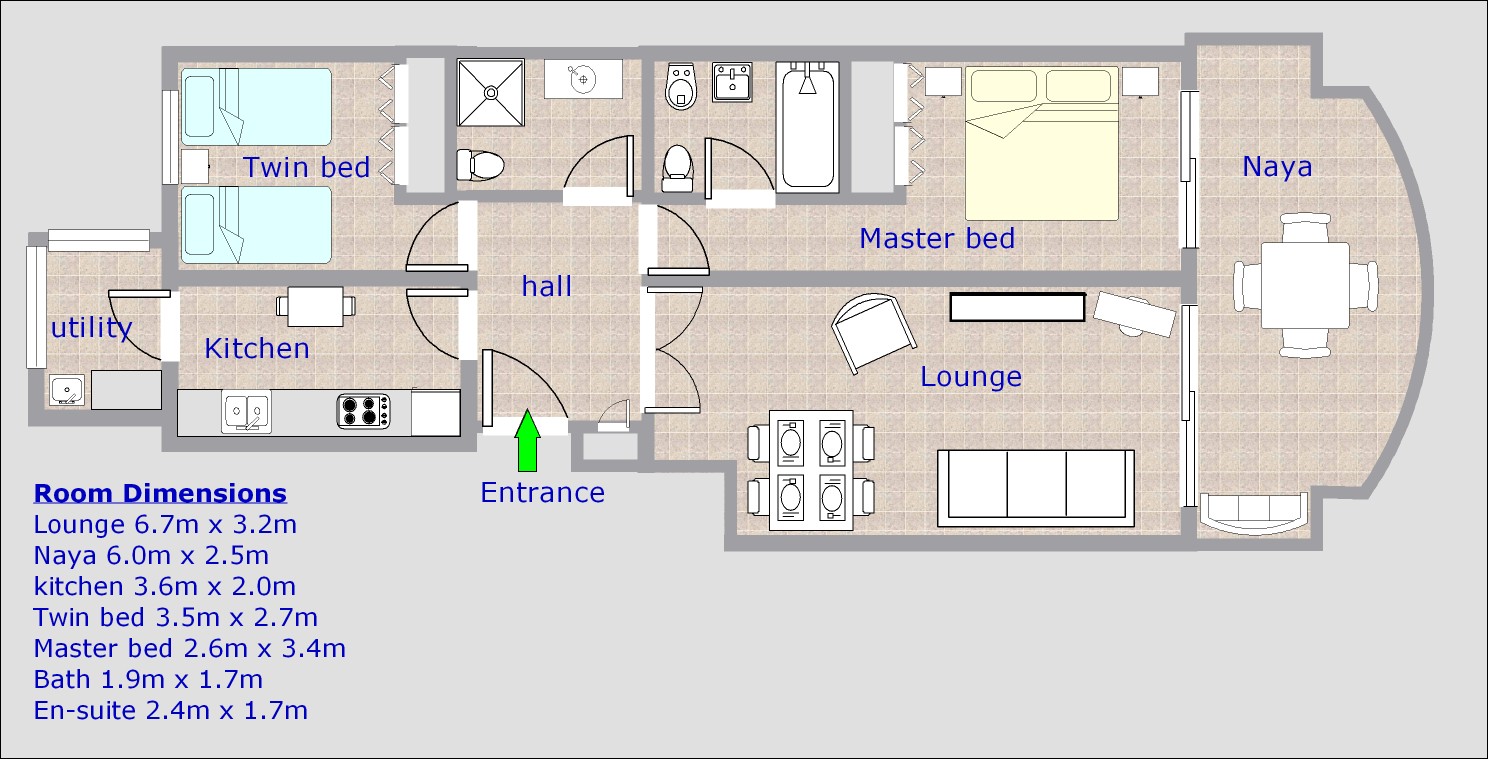 Note:Floor plan and room sizes are for guidance only. 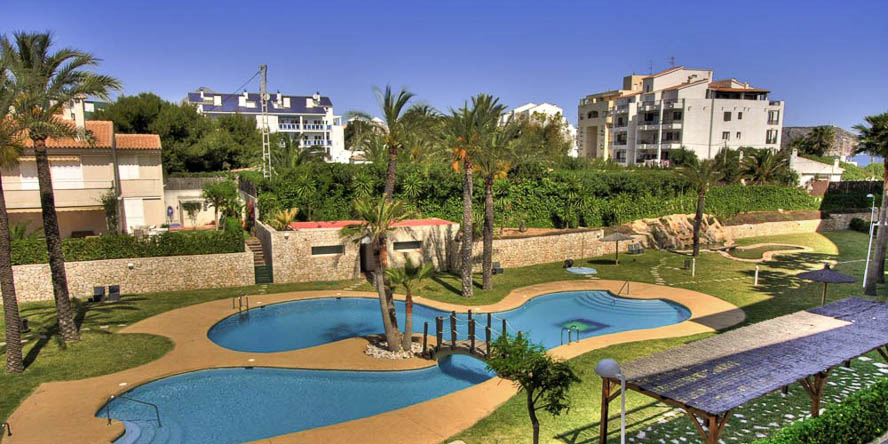 This 2nd floor, Golden Gate apartment has been furnished to a good standard and is located just a few meters from the beach. The area is relaxing yet only 900m from the Arenal sandy beach with all it´s shops, bars and restaurants. Within the complex along with the beautiful pool and water features you will find table tennis, a paddle court and a gym.

The apartment itself boasts all the mod cons one would expect from such a property including air-conditioning/ heating and marble floors throughout . It comprises of an entrance hallway leading to a bright & airy lounge/dining room with patio doors leading to a furnished private patio for ál fresco’ dining.

Private secure underground parking is located beneath the complex.

This coastal town on the eastern tip of Alicante province has become such a popular holiday destination that its population of around 32 thousand inhabitants swells up to more than triple this number during the summer tourist season.

Javea (called Xabia, in the Valenciano dialect) is the oldest known Roman settlement on Spain's east coast, dating as far back as the second century A.D. when Roman boats traded here for fish and minerals. During the sixth century Visigoth Christian monks arrived and founded the monastery of San Martin. To this day you will encounter locals with Visigoth names. There is not much evidence left of their influence, but the Moors were present from the 700s until they were expelled in 1609.

Pirate attacks forced inhabitants to retreat to a walled section two kilometers inland from the coast. This walled town was maintained until the 1800s. Today it is the historic Old Quarter, where you can still see the 14th century Gothic church of San Bartolome, around which the town was built. Originally built out of stone carved out from the rocky shore, the church's walls are pockmarked by bullet holes from the Spanish Civil War of 1936 to 1939. North of the church sits the market, where you can enjoy fresh local produce - fruits, vegetables, fish and meat. Around the town are many whitewashed traditional houses, with their characteristic iron window grills and balconies. A museum and art gallery are also notable places to visit.

During the 60s, Javea was converted from a sleepy fishing town into one of the centers of Spanish tourism, right alongside Marbella and Mallorca as one of the premiere holiday destinations in the country. The port area houses some restaurants, a gravel beach and the marina. The nearby Avenida del Mediterraneo offers more restaurants and bars where you'll find a surprising variety of culinary offerings, including dishes from China, Germany, France, England and the Netherlands. A path near the harbor will take you up the hill to reveal a magnificent view of the Cabo San Martin.

Arenal Beach is legendary for its clean, clear waters, and is even accredited by the World Health Organization as a "near-perfect blue flag beach." The beach curves gently, with restaurants, bars and souvenir shops dotting the promenade that stretches about a mile and a half along the shore. It's common to see sand sculptors doing their thing, and you can also join a volleyball game or two. The night life here and in the old quarter is quite active, especially during the tourist season. The bars offer live music besides ice cold beer and cocktails, and may stay open until the wee hours of the morning. Water sports are very popular, as you can expect. There is a marine sanctuary in nearby San Antonio, where you can enjoy diving or snorkeling.

For nature lovers, a holiday in Javea will include a visit to Montgo Nature Park. Rising up 753 meters (2,470 feet) the Montgo Mountain features more than 600 species of plants, some of which are unique to the area. This is the second highest peak this close to the Mediterranean Sea, but getting to the top is an enjoyable trek through a wide range of terrain, truly a nature trip to remember. A number of world class golf courses make sure aficionados of the sport also have their little pocket of paradise in Javea. There are a number of windmills in the area, with some that date back to as early as the 14th century.